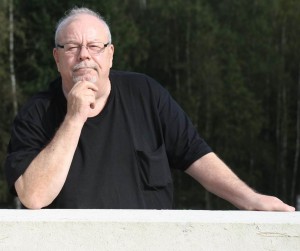 Gary was born and raised in Stettler, Alberta. He was married there and raised three children. He was a livestock auctioneer and part owner of the Stettler Auction Mart, a family business started in 1954. In addition, he is a professional agricultural real estate appraiser and broker.

The ‘70’s and ‘80’s were hectic days for Gary. In addition to raising a young family and working as an auctioneer and agricultural real estate consultant, he also served on the municipal council for nine years, the last three as Mayor of the Town of Stettler. He also found the time to sing in a country band and has recorded two albums.

In 1989, Gary moved to Calgary to pursue his career as an agricultural real estate consultant. In 1990 he became a co-owner of the Longbranch Saloon, a country nightclub, in Drumheller.

Gary’s interest in military history began in the mid 1990’s while doing research on his own father’s WW2 service. Following this and after a number of tours of the Normandy battlefields, he developed an interest in WW1, researching a great uncle’s service. This uncle was an “Old Contemptible” and was one of the first British (Irish) soldiers to enter France in WW1 thus earning the 1914 star/clasp. He went on to earn the DCM (Distinguished Conduct Medal), the MM (Military Medal) and was mentioned-in-despatches 3 times. After WW1, he emigrated to Canada, then enlisted for WW2. However, his age was a factor and he was assigned to the Veterans Home Guard.

By now, Gary was fully committed and turned his passion north to the theatres of NW Europe. Hitler still had elite, battle hardened front line soldiers including fanatical paratroopers and remnants of some of his storied SS Divisions, now fighting intensely for their fatherland. The following eight months after Normandy involved some of the most intense and ferocious battles of the War, most notably the Battle(s) of the Scheldt and the Battle(s) of the Rhine, both of which were a prerequisite to the Liberation of Holland.

We are exceptionally fortunate with our team of battlefield guides.  Some have active military service backgrounds, that enables them to better understand the experience of our Veterans on the battlefields of the two great wars. All are recognized experts in Canadian Military History as a result of years of research and travel to these historic battlefields. This, combined with their passion for guiding, enables them to bring this history to life for you; on the same ground where these often horrific battles took place. We focus on the individual Veteran’s experience, rather than strategic planning or machines. Many of our guests are more interested in the life of the private soldier than the general officer.

Our primary purpose is to help you to understand what it may have been like for our Veterans who fought for our freedom in two World Wars. You will discover how these very ordinary men accomplished extraordinary feats, while enduring such hardship, danger and discomfort– in the face of extreme weather conditions and relentless and committed enemies.

Through our guides, you will hear the stories of men and women who served their country to the best of their ability and, how our Canadian heroes ‘punched above our weight’ in both the great wars- often, astonishing even their own allies. In the immortal words written in The “Ode of Remembrance” taken from Laurence Binyon’s poem, “For the Fallen”;

“They went with songs to the battle, they were young.

Straight of limb, true of eye, steady and aglow.

They were staunch to the end against odds uncounted,

They fell with their faces to the foe.

They shall grow not old, as we that are left grow old:

Age shall not weary them, nor the years condemn.

At the going down of the sun and in the morning,

We will remember them.

They mingle not with their laughing comrades again;

They sit no more at familiar tables of home;

They have no lot in our labour of the day-time;

They sleep beyond England’s foam.”