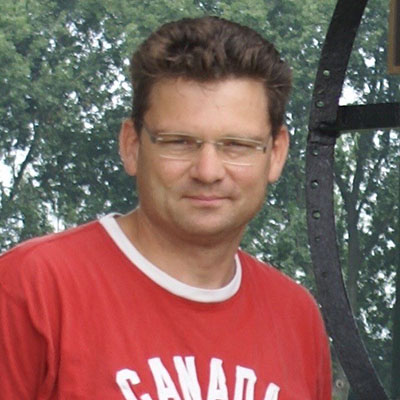 Robert was born in the ‘Breskens Pocket’ in Oostburg on November 7th 1969. Since his earliest childhood he has been fascinated by the war and especially by the Canadian liberators of the Scheldt area. While collecting for many years military artifacts related to the Battle of the Scheldt, his interest widened to include historical research since the mid-nineties.

In his professional life he studied physical chemistry and has been working in the paper and food industry. Up until now he privately published two historical studies, of which ‘Five days in November’ about the battle for Welberg and Steenbergen in November 1944, was translated in English and made available to the Canadian public. The other publication deals about local war volunteers who joined the re-raised Dutch army one day after the Canadians liberated Steenbergen.

With Catsburg’s family coming from Flushing, his childhood in the Breskens pocket and currently living in Steenbergen, each little corner of the whole Scheldt Battle area is well known to him. Being a ‘local’, combined with his extensive library, tons of archive material, an extensive network of other enthusiasts and a never-ending passion for the topic, guarantee a tailor made tour that will fit every visitors interests.

Robert’s special areas of focus for guiding are:

WWII- Battle of the Scheldt