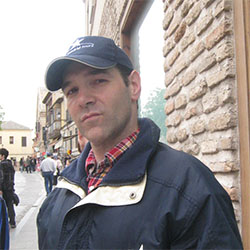 Born in Madrid in 1973. Graduated from the High school Lycée Français de Madrid. In 1998, he got his Law Degree, followed a year later by a European Law Master, at the San Pablo University of Madrid.

Although a Lawyer by training he is a military historian at his heart.

The Continental Law system used in Spain being based on the Roman Law, he started developing an interest for the Roman world in general and, by the Roman warfare in particular, forerunner of modern armies.

Improving his English language skills in Northern Ireland in 1988 he was captivated by the Spanish Armada episode; he then became a specialist in the Spanish XVI Golden Age century (Spanish Navy warfare, infantry Tercios, the “Spanish road” a military route from Spain to the Spanish Netherlands, etc.) The Spanish Empire and military forces bear many similarities with the ancient Rome and its Legions.

He spent four years working in the banking sector in Luxembourg (2000 – 2004) and, not only being in full former XVI century Spanish Netherlands, but also at the friction point of many Empires and French – German conflicts, he visited many museums, sites and battlefields in Luxembourg, Belgium, France and Germany.

Among them: middle ages castles in Belgium, France and Luxembourg (Bouillon, Sedan and Vianden), the Spanish and French fortifications as well as the casemates of the city of Luxembourg, Waterloo battle reenactment (year 2009), the French garrison cities of Verdun and Metz (in both cases including its forts), the Maginot and Siegfried lines, military cemeteries in Belgium and Luxembourg, the military museums of Bastogne, La Roche en Ardenne, La Gleize, Poteau Saint–Vith and Brussels (B), Novion –Porcien (Fr), Diekirch, Clervaux and Ettelbrück (Lux) and, finally, many battlefields in Luxembourg and Belgium related to the Battle of the Bulge.

All this lead him to write an historical guide:

“To understand the Battle of the Bulge. History, weapons and battlefield“.

A book based on current pictures explaining the battle – prelude and main phases – the order of battle, what kind US and German military units participated, what was the structure of the different US and German units , the weapons used (from the handgun to heaviest tank), and where you can find it today. Museums, commemorative sites, memorials, statues, vehicles or artillery pieces displayed on public grounds, battlefields and military cemeteries, among other materiel, are described and studied in the book.

While doing his research for his book, he had the privilege to interview US veterans like the decorated World War II Sergeant Myers, who served in Gen. George S. Patton’s Third Army in Company G, 317 Regiment, 80th “Blue Ridge” Infantry Division, and was 1 of 3 American G.I.s that found the Buchenwald Concentration camp. He also had the chance to meet a direct relative of Gen. Patton.

Some military hardware included in the book (Panzer IV, Stug III and Pak 40) are still displayed today at the Spanish Army Armored Collection and is visited on the tour “Spain and the WW2 and the Mackenzie-Papineau Battalion”.

Guillermo has attended to the following defense and military seminars:

“The ambitions and challenges of the European Defense”. EURODEFENSE France – Paris; July 2002

He also regularly attends to SICUR fair (Spanish and International Security and Safety) in Madrid.

He is currently finishing, after two years of research, a new book:

“The Spanish National police (1978 – 1986); the State uniformed urban police of the Spanish Transition”.

A corps than only lasted 8 years, but in a critical period of the History of Spain: between the end of General Franco´s regime and Spain´s access to the European Economic Community.

A rather unusual force according to western European standards; it was designed to replace General Franco´s Armed police (the Armed police was established in 1939, after our Civil War, with some Nazi Germany assistance and was part of the Spanish Armed forces), so it was civilian in nature, however, it was heavily militarized: the high ranking officers belonged to the Spanish Army and military discipline and internal organization governed its regulations. Nevertheless a quite efficient force, and the springboard for our current, fully civilian, national police agency.

Guillermo’s special areas of focus for guiding is the Spanish Civil War.