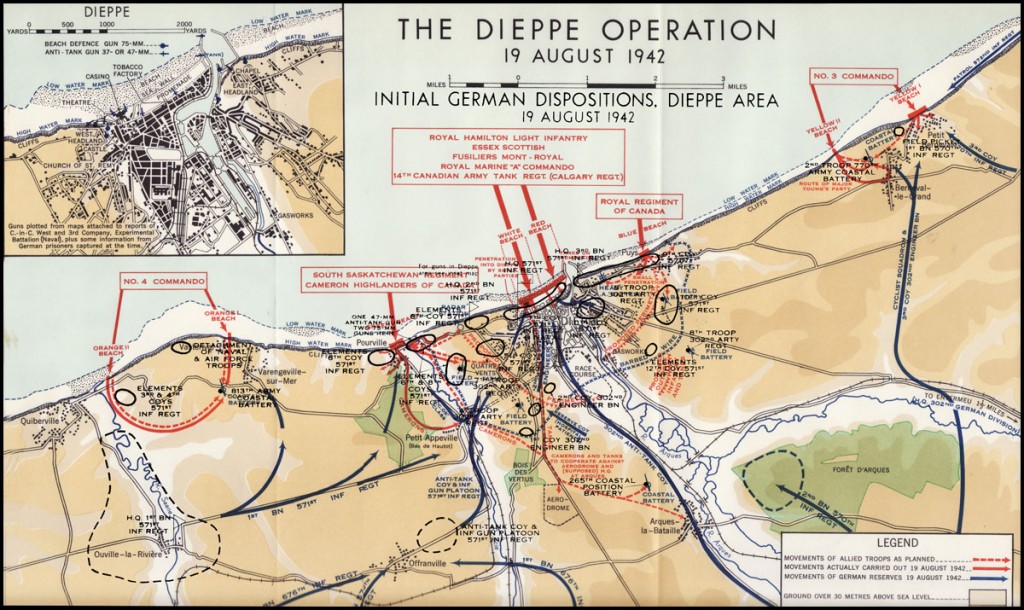 DIEPPE TOURS ARE NOT AVAILABLE AS A STAND-ALONE TOUR. THEY ARE ONLY AVAILABLE AS PART OF OUR CANADIAN’S CHOICE TOUR.

Background – The Russians were demanding a Second Front – a full-scale invasion of Western Europe. Since the Allies had not the logistical power to mount an invasion, they decided to stage a major raid on the French port of Dieppe. This landing was carried out mainly owing to political rather than military pressure. It was intended to seize and hold a major port for a short period, both to prove it was possible and to gather intelligence from prisoners and captured materials while assessing the German responses. Designed to foster German fears of an attack in the west, compelling them to strengthen their Channel defenses at the expense of other areas of operation as well as to placate Stalin, the raid would also provide an opportunity to test new techniques and equipment, and be the means to gain the experience and knowledge necessary for planning the great amphibious assault.

Your tour begins and ends with the events of ‘Operation Jubilee’, better known as the Dieppe Raid.

The attack on Dieppe took place on August 19, 1942. The troops involved roughly 5,000 Canadians, the remainder being British Commandos and 50 American Rangers. They had received extensive commando-type training earlier in the summer, when the first attempt had been cancelled at the last minute because of bad weather. The raid was supported by eight Allied destroyers and 74 Allied air squadrons (eight belonging to the Royal Canadian Air Force, RCAF).

The plan called for attacks at five different points on a front of roughly 16 kilometres. Canadian forces would launch simultaneous flank attacks just before dawn on the cliffs east and west of the port at Pourville (Green Beach) and Puys (Blue Beach), followed half an hour later by the main attack on the town of Dieppe (Red & White Beaches) itself. British commandos were assigned to destroy the coastal batteries at Berneval (Yellow Beach) on the eastern flank, and at Varengeville (Orange Beach) in the west.

Success depended on surprise and darkness, neither of which prevailed, due to a series of mishaps. At Puys (Blue Beach), on the eastern flank, the Royal Regiment of Canada met violent and accurate machine gun fire, from the fully alerted German soldiers. Only 33 men out of the more than 500 who came ashore there made it back to England. The troops, together with three platoons of reinforcements from the Black Watch (Royal Highland Regiment) of Canada, were pinned on the beach by mortar and machine-gun fire, and were later forced to surrender. Evacuation was impossible in the face of German fire. Of those who landed, 200 were killed and 20 died later of their wounds; the rest were taken prisoner — the heaviest toll suffered by a Canadian battalion in a single day throughout the entire war. Failure to clear the eastern headland enabled the Germans to enfilade the Dieppe beaches and nullify the main frontal attack.

At Pourville (Green Beach), on the western flank, the South Saskatchewan Regiment and Queen’s Own Cameron Highlanders of Canada also met stiff resistance and were forced to halt.  A Victoria Cross was awarded to the Commanding Officer Lt. Col. Cec Merritt, of the South Sasks, for his self-sacrificing bravery while organizing the defense of the beach to allow the evacuation of his men.

The main attack was to be made across the pebble beach in front of Dieppe. German soldiers, concealed in cliff top positions and in buildings overlooking the promenade, waited. As the men of the Essex Scottish Regiment assaulted the open eastern section, the enemy swept the beach with machine-gun fire, from the German Bunkers and positions set into the cliff at the eastern-most point of the landing zones, Yellow beach. The ships transporting the men of No. 3 Commando had run into the tail end of a German convoy on the way in and several of their crafts had already been sunk. Only 18 men of this assault force made it in to engage the enemy.

All attempts to breach the seawall were beaten back with grievous loss. When one small party managed to infiltrate the town, a misleading message was received aboard the headquarters ship, which suggested that the Essex Scottish were making headway. Thus, the reserve battalion Les Fusiliers Mont Royal was sent in. They, like their comrades who had landed earlier, found themselves pinned down on the beach and exposed to intense enemy fire.

The Royal Hamilton Light Infantry landed at the west end of the promenade opposite a large isolated casino. They were able to clear this strongly held building and the nearby pillboxes and some men of the battalion got across the bullet-swept boulevard and into the town, where they were engaged in vicious street fighting.

Misfortune also attended the landing of the tanks of the Calgary Regiment. Timed to follow an air and naval bombardment, they were put ashore ten to fifteen minutes late, thus leaving the infantry without support during the first critical minutes of the attack. Then as the tanks came ashore, they met an inferno of fire and were brought to a halt, stopped not only by enemy guns, but also immobilized by the shingle banks and seawall. Those that negotiated the seawall found their way blocked by concrete obstacles, which sealed off the narrow streets. Nevertheless, the immobilized tanks continued to fight, supporting the infantry and contributing greatly to the withdrawal of many of them; the tank crews became prisoners or died in battle. None of the 29 tanks put ashore made it off the sea-front and the soldiers not much further.

The last troops to land were part of the Royal Marine “A” Commando, who shared the terrible fate of the Canadians. They suffered heavy losses without being able to accomplish their mission.

Orange Beach, the most westerly of the beaches, is where No. 4 Commando under Lord Lovat came ashore and carried out what was probably the only successful assault of the Dieppe Raid where the Gun batteries of Varengeville were captured and their guns destroyed before the Commando’s withdrew, suffering only 45 casualties in all.

The raid also produced the most tremendous air battle of the war. While the Allied air forces were able to provide protection from the Luftwaffe for the ships off Dieppe, the cost was high. The Royal Air Force lost 106 aircraft, which was to be the highest ever single day total. The RCAF loss was 13 aircraft.

By early afternoon, Operation Jubilee was over. Conflicting assessments of the value of the raid continue to be presented. Some claim that it was a useless slaughter; others maintain that it was necessary to the successful invasion of the continent two years later on D-Day. Out of it came improvements in technique, fire support and tactics, which reduced D-Day casualties to an unexpected minimum. The men who perished at Dieppe were instrumental in saving countless lives on June 6, 1944. While there can be no doubt that valuable lessons were learned, a frightful price was paid in those morning hours of August 19, 1942. Of the 4,963 Canadians who embarked for the operation only 2,210 returned to England, and many of these were wounded. There were 3,367 casualties, including 1,946 prisoners of war; 907 Canadians lost their lives.

The German Army’s losses at Dieppe, though not inconsiderable, were much smaller than our own. The High Command communiqué issued after the action admitted 591 casualties suffered by all three services. Figures in German reports now in our hands vary from this in detail but not in the broad picture they present. The 302nd Division reported the Army losses as five officers and 116 other ranks killed, six officers and 195 other ranks wounded, and 11 other ranks missing.

This tour is only available as part of our Canadians Choice tour and not available on a stand-alone basis. If you have any special requests, like following the footsteps of a particular Veteran or unit, we are happy to accommodate, whenever possible. Please provide us with his details and we will do some preliminary research, to make your tour an even more meaningful experience.

Most guests taking this tour arrive at Schipol Airport (Amsterdam). You will be responsible to get to Bergen-op-Zoom, where the tour originates and ends.

This tour, as well as our others, will be costed on the following basis. The price quoted will be for all ground transportation within the battlefield areas, with professional guid. It does not include anything else. Of course, we are happy to make recommendations to help with your travel planning, like hotels, B&B’s. There are many hotel booking sites but we have always liked http://booking.com.