The Second Army was to cross the Rhine between Wesel and the western outskirts of Rees with the 12th Corps on the right and the 30th on the left. General Horrocks’ Corps was to capture Rees and Haldern, and establish a lodgement deep enough to permit bridges to be built. This assault was to be carried out by the Highland Division on a two-brigade front, the 9th Canadian Brigade having a “follow-up” role immediately behind the 154th Brigade on the left.

The Canadians’ task would be to thrust towards Emmerich, securing control of the area Vrasselt-Praest-Dornick, as a preliminary to further operations by the 3rd Canadian Division directed against Emmerich. Alternatively, the Canadian brigade might be required to capture Millingen.

While the Air Forces pounded German installations, Allied gunners prepared to deliver a massive bombardment from the west bank of the Rhine. It is difficult to establish the total number of guns employed on the Army Group front; the Second Army calculated that a grand total of 3411 (including 853 anti-tank guns and 1038 antiaircraft guns and rocket projectors) supported its five corps, of which the 18th U.S. Airborne Corps was one. The resources directly under the artillery commander of the 30th Corps included the divisional artilleries of the Guards and 11th Armoured Divisions and the 3rd British, 3rd Canadian, 43rd (Wessex) and 51st (Highland) Infantry Divisions, as well as three Army Groups Royal Artillery (including the 2nd Canadian) and the 30th Corps Troops Royal Artillery. The fire plan included counter-battery preparation, to prevent the enemy shelling our forming-up areas and crossing places, counter-mortar tasks, a preliminary bombardment to lower the defenders’ morale (in which the 4th Canadian Armoured Division’s artillery took part), harassing fire and a smokescreen. Artillery of the 2nd Canadian Corps, not otherwise allocated, participated in a diversionary fire plan.

The amphibious phase of “PLUNDER” began at 9:00 p.m. on 23 March after heavy bombardments by Allied aircraft and artillery. “Pepper Pots” similar to those used at the beginning of “VERITABLE” helped to neutralize German defences. The expenditure of ammunition was enormous: in less than two hours, two batteries of the 4th Light Anti-Aircraft Regiment R.C.A. fired 13,896 rounds on “Pepper Pot” tasks. (This unit also gave directional tracer fire with one Bofors to mark the left flank of the Highland Division’s assault.) The 1st Rocket Battery R.C.A. supported the same division’s attack. The preliminary bombardment undoubtedly softened the German resistance. The enemy’s artillery could reply only sporadically, and retaliation from the Hoch Elten feature was described as “practically negligible”, little more than “light harassing fire”.

As the assaulting troops moved forward to cross the 500 yards of swift water their movements were carefully controlled by a “Bank Group” organization. It ensured that crossings were made according to priorities and that undue congestion was avoided at points of embarkation. From marshalling areas in the rear troops moved forward to the “Buffaloes”, stormboats, DUKWs and ferries which carried them across the Rhine. Navigation was assisted by “Tabby” lights, invisible unless seen through special glasses. On the far bank of the river another headquarters directed the craft-loads of troops to forward assembly areas, where units rejoined their formations as required. The work of the “Bank Group” organization was unquestionably a major factor in the success of the assault. Two other aspects of the crossing deserve mention: the use of D.D. (amphibious) tanks, and the employment of Force “U” of the Royal Navy. The tanks followed the leading infantry, with a view to being available to give prompt support in the bridgehead. No Canadian tanks swam the Rhine. Naval Force “U”, under Captain P. H. G. James, R.N., was organized in three squadrons, each consisting of one flotilla of Landing Craft, Mechanized, and one flotilla of Landing Craft, Vehicle, Personnel. These craft, some of which were 50 feet long, were brought overland from Antwerp to Nijmegen with the intention of using them to ferry troops and vehicles across the Rhine. Twenty-four L.C.V.(P.) and 24 L.C.M. were allotted to Second British Army, while 12 of each came under the control of First Canadian Army for the use of the 2nd Corps during “PLUNDER”.

The attack across the great river could have been a very bloody operation. But in the actual circumstances existing on 23 March 1945 it was no such thing. Only six minutes after the Highland Division launched its attack west of Rees on the 30th Corps front, the leading wave reported its arrival on the far bank. The first really stiff opposition was met a mile and a half inland, at Speldrop. The Scots were supported by D.D. tanks of The Staffordshire Yeomanry (Queen’s Own Royal Regiment), which had three tanks sunk during the crossing. Rees was soon outflanked and the bridgehead rapidly expanded.

The Canadian 9th Brigade Beyond the Rhine

At 4:25 on the morning of 24 March the four rifle companies of The Highland Light Infantry of Canada (Lt.-Col. P. W. Strickland) began crossing the Rhine in Buffaloes under “sporadic shelling”. The H.L.I., fighting in this phase under the154th Brigade, was the first Canadian unit across. On the farther bank guides led it to an assembly area north-west of Rees. The 154th Brigade, we have seen, had met stiff resistance at Speldrop (the Highland Division’s commander, General Rennie, was killed in the brigade area during the morning) and the Canadians were ordered to capture the village. Some parties of the Black Watch were still cut off and surrounded in Speldrop when, in the late afternoon, the Highland Light Infantry advanced against the outskirts. The defending paratroops fought fiercely, but the assault was pressed with determination over open ground, valuable supporting fire being provided by six field and two medium regiments and two 7.2-inch batteries. Within the village the enemy held out desperately in fortified houses, which could only be reduced by “Wasp” flame-throwers and concentrations of artillery fire.The battle continued well on into the morning [of the 25th]. Houses had to be cleared at the point of the bayonet and single Germans made suicidal attempts to break up our attacks. . . . It was necessary to push right through the town and drive the enemy out into fields where they could be dealt with.

The H.L.I. relieved the trapped detachments of the Black Watch and put out the last embers of resistance. Their casualties during the two days’ fighting were, for the circumstances, light: 33, including ten killed.

Meanwhile, on the afternoon of the 24th, the remainder of the 9th Canadian Infantry Brigade had joined their comrades east of the Rhine. The Highland Light Infantry of Canada came back under Brigadier Rockingham and that night his brigade, reinforced by the North Shore Regiment from the 8th, relieved the 154th. During the next two days the 9th Brigade struggled to open an exit from the pocket formed by the Alter Rhein northwest of Rees. These operations centred about the villages of Grietherbusch, Bienen and Millingen. While they were in progress, on the afternoon of the 25th, the brigade came under the command of the 43rd (Wessex) Division which was moving into the bridgehead. General Horrocks was thus gradually implementing his plan to develop the attack on a three-division front, with the 51st, 43rd and 3rd Canadian Divisions right, centre and left respectively.

On the left of the whole Allied advance, The Stormont, Dundas and Glengarry Highlanders captured Grietherbusch without too much difficulty; but far heavier opposition was encountered at Bienen. There, on the 25th, The North Nova Scotia Highlanders attacked across open ground against very determined defenders. The Canadians had, in fact, drawn in the lottery the area on the British front where resistance was fiercest. The 15th Panzer Grenadier Division had been put in here from Army Group Reserve to hold the Alter Rhein bottleneck and the important road junction of Bienen. Although artillery and medium machine-guns of The Cameron Highlanders of Ottawa (M.G.) lent support, the North Nova Scotias were soon pinned down by German automatic weapons and mortars. “The battalion had quite definitely lost the initiative and contact between platoons was next to impossible because of the murderous fire and heavy mortaring.” Early in the afternoon General Horrocks visited the Canadian sector while, with the help of armour and Wasps, Lt.-Col. Forbes mounted a new attack against the village. By the end of the day his men had penetrated the southern portion; but their casualties had been very severe-114, of which 43 were fatal. As the North Nova Scotias’ diarist wrote, it had been “a long, hard, bitter fight against excellent troops who were determined to fight to the end”. Helped by a troop of 17-pounder self-propelled guns of the 3rd Anti-Tank Regiment R.C.A., The Highland Light Infantry of Canada now took over the task of clearing the rest of Bienen. “Progress was very slow as the enemy fought like madmen.” But the H.L.I. were not to be discouraged, and during the morning of the 26th they mopped up the last resistance in the place.

About a mile north-east of Bienen was Millingen, on the main railway line between Emmerich and Wesel. This village now became the target of The North Shore (New Brunswick) Regiment. It went in at noon on the 26th, with the support of artillery and armour, and was completely successful, all objectives being secured on the same afternoon; but the day cost the life of its commander, Lt.-Col. J. W. H. Rowley, who was killed by a shell early in the attack. Simultaneously The Stormont, Dundas and Glengarry Highlanders cleared the villages to the west of Millingen. The Canadian buildup east of the Rhine continued with the arrival of the 1st Battalion, The Canadian Scottish Regiment, also under the command of the 9th Brigade. As the bridgehead was steadily enlarged the remainder of the 3rd Division prepared to follow; on the 27th General Keefler established his tactical headquarters on the right bank while the balance of the 7th Brigade joined the 9th in the bridgehead; and at 5 p.m. he took over the left sector of the 30th Corps line. His last brigade, the 8th, crossed the river on 28 March. At noon that day the 2nd Canadian Corps (still under the Second Army) took the 3rd Canadian Division, and its sector of the bridgehead, under command. 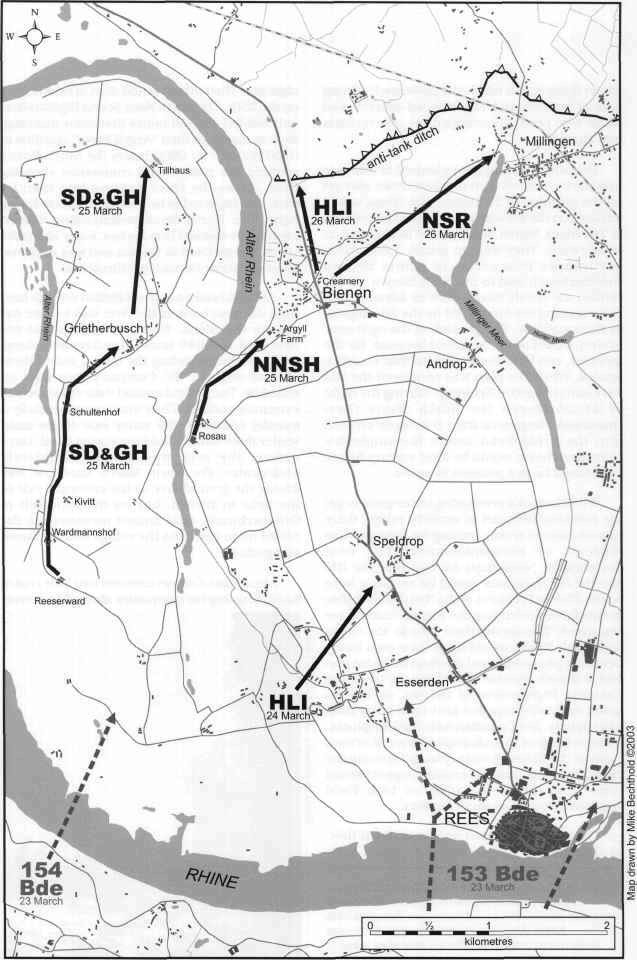